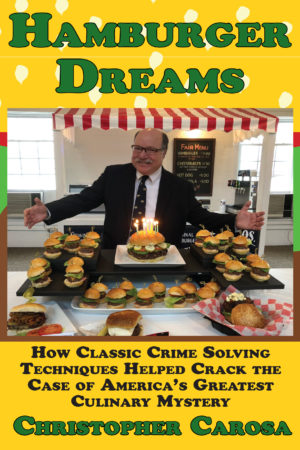 “Up until now, no one has undertaken an exhaustive research survey of each of these stories,” says Carosa, a contributor to Forbes.com. “While I can’t spoil the surprise, I can tell you that there’s incontrovertible evidence that at least 2 of the origin stories are blatantly false.”

In Hamburger Dreams, Carosa, employs classic crime solving techniques to crack the case of America’s greatest culinary mystery. Reviewers call Carosa “a born narrator” who, with “the brilliance of a culinary gumshoe and the diligence of a conscientious reporter,” uses “meaty research and tantalizing story-telling” to “separate fact from fiction.”

In Hamburger Dreams, Carosa traces the history of the hamburger back in time to crack this case of the true hamburger origin story. He submits his findings in the same meticulous way a DA might present a final summation to the jury, ever careful to weave facts together in the riveting tradition of all great story-tellers.

Would like him to tell this story to your audience? Call Chris Carosa at (585) 733-4553 or email him at ccarosa@ChrisCarosa.com to arrange an interview.