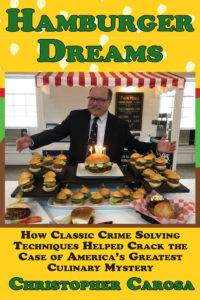 Question #1: How did you first become interested in the origin of the hamburger?
Answer #1: In the spring of 1982, my Senior year in in college, I had finished up all my required coursework except for my senior thesis. (If you’re curious, it had to do with ultraviolet emissions of horizontal branch stars and what clues they might provide in current stellar evolution models, but that’s another story.) I had to fill up my course schedule and I my architecture friends convinced me to take the class “Study of the City.” What sold me was the final paper was to be a biography of your home town. I was born in Buffalo. During the course of my research, I discovered a misfiled Buffalo newspaper from the 1880s. That’s where I first read about the invention of the hamburger. Unfortunately, when I went back to find that document in 2011, I discovered Yale had misfiled it again and then purged it from their library.

Question #2: How long have you been doing research on this topic?
Answer #2: I have been picking up tidbits ever since 1982. My research began in earnest in 2011 as I was researching for the chapter on this subject for the book 50 Hidden Gems of Greater Western New York. That book contains my first writing on the hamburger origin.

Question #3: What have you found to be the most valuable resource in doing your research?
Answer #3: That’s easy. Without access to the digitized versions of old newspapers, my research would have taken much longer. I used four primary on-line data bases: Newspapers.com, FultonHistory.com, NY Historic Newspapers, and The Library of Congress. Although I read nearly a dozen books, I fact-check anything of interest by finding contemporary newspaper reports, death records, and, yes, even grave stones.

Question #4: What the most surprising thing you discovered in your research?
Answer #4: The actual source of the St. Louis World’s Fair origin story.

Question #5: What kind of response have you received from the hamburger origin stories that you’ve proven to be false?
Answer #5: Nothing formal to date, but I expect that to change as word gets out. For some fans of those cities and stories, I think they were skeptical to begin with, so they aren’t surprised by my findings.

Question #6: What is one thing you hope people take away from your research?
Answer #6: Never belief what you read in the newspaper. And you’re hearing that from a newspaper guy!